The History of the Cucumber
~ from Mother Earth News

The cucumber is an annual that originated in India, where its wild ancestor Cucumis hardwickii Royale may still be found in the subtropical valleys of the Himalayas. This ancient cucumber is bitter, as a protection against animals eating it before it is ripe. This natural bitterness still lingers in many cultivated forms, often in the skin or, in the very long-fruited varieties, in that portion of the cucumber closest to the stem.

Cucumbers were first brought under cultivation in the Indus Valley, but from there their culture spread into China and the Near East by the seventh century B.C. China and Japan developed many of the very long-fruited varieties that served as breeding stock for some of the long cucumbers we know today. The ancient Greeks were the first Europeans to cultivate the cucumber, and Roman authors have left a considerable body of information concerning its cultivation and pickling. The Romans made crock pickles with cucumbers very similar to those prepared today by the Germans and Eastern Europeans. Since cucumber seeds have been excavated from Roman sites in London, it has been assumed that the culture of the cucumber spread throughout western Europe during the Roman Empire. The oldest medieval documentation has come to light in archaeological remains found at Krakow, Poland, dating from A.D. 650 to 950. Unquestionably, such old remains would suggest that the Polish cucumber pickle and its Jewish variants have extremely long pedigrees in central Europe, reaching the Slavs even before Christianity.

In spite of its widespread cultivation in Europe, the cucumber does not grow very well in England because of the country’s cool weather and its northern latitude. This has led archaeologists to surmise that the cucumber seeds found in London may have come from imported vegetables, or from the gardens of a well-to-do villa, for Roman aristocrats maintained cold frames and heated buildings that made the cultivation of exotics possible. Yet it was not until the sixteenth century, when English aristocrats began to install cold frames and hothouses, or “stoves,” as they are still called, that the culture of the cucumber became widespread in the British Isles. Since then, the English have raised the cultivation of the greenhouse cucumber to an art form, and most of the heirloom cucumber varieties that they have preserved to this day were originally developed for forcing.

In colonial America the cucumber did very well. Our hot summers appeal to its subtropical temperament, and many of the soils along our eastern coast are of the loose, sandy kind that cucumbers like. Thus, while the cucumber was for a long time a symbol of the gentleman’s kitchen garden in England, in this country it quickly became as common as the watermelon. In fact, the two were sometimes grown together in the same patch. 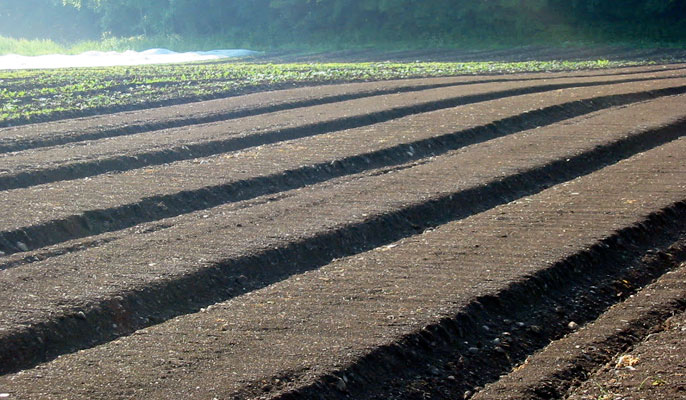 Now that the weather is warming up, we can start thinking about fresh food!!! Despite this past month’s weather, we managed to get about 5 acres seeded in spring greens, carrots, and beets. We have faith the warmth will continue. It hasn’t let us down yet…all these years.

So take heart your spring and summer sustenance is already in the ground and we are excited. One of the big changes this year to our CSA is that we will be going an additional two week bringing us right up to Thanksgiving. Over the years as the weather has warmed we have had produce later into later into November. Often times we have tomatoes and peppers through October. For this reason, our Regular season shares do not often get many sweet potatoes or Butternut squash.

We look forward to the longer CSA season and hope that you will also enjoy having the extra produce for Thanksgiving…a true celebration of the harvest!!

Here we are, the beginning of February and there is fresh snow on the ground with more to come. It has been a winter of extremes and we can imagine the steady coming of spring will bring more of the same!

As much as we know the weather will be unpredictable, there is only so much preparation we can do in the face of these unknowns. We will have the tractors ready, the plants ready, the seeds ready and our employees ready for spring whenever it decides to get here.

In light of the increasing challenges in having spring go as planned, we are hoping to have our summer share start with flexible opening dates this year. We will be aiming for a very strong share to start off in early to mid-June. We will keep you all posted!! 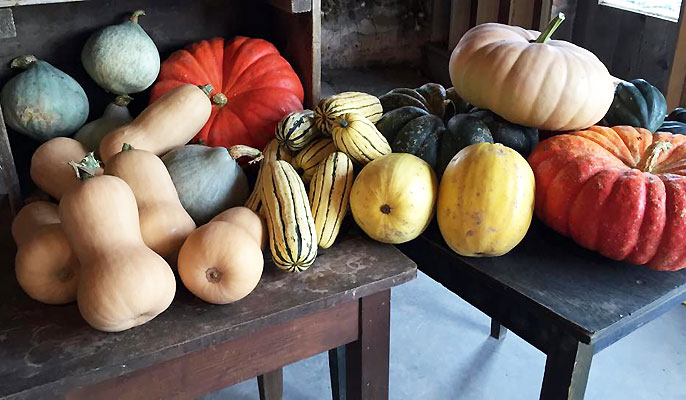 Butternut Squash is harvested and safe in the barn for winter storage.

This time of year we are harvesting double time. The regular fresh items are being harvested daily, but we are beginning to tackle the bigger volume items on the farm. Butternut squash, celeriac, sweet potatoes, cabbages, carrots, and beets to name a few.

We harvest these items into apple bins, not the smaller green and yellow boxes. Instead of bunches, and pounds we are harvesting fields worth of produce by the ton. It is an exciting time of year. The storage coolers are being filled so that you can eat all winter long.